Ever watched Rally videos and wondered —  What is all that talk?

Those are pacenotes – a system used to tell the driver what is coming next.   However not all pace notes are made equal.     The idea is if done perfectly a driver could operate a rally car with their eyes basically shut.     The co-driver / navigator is reading notes, provided by the Rally, or written by them like this….

Drivers use different systems depending on the driver.   Russian born but Canadian rally driver Leo Urlichich @crazyleo has a very custom notes system that includes finnish words and other phrases that only those who have worked with him will ever know, but he claims helps him greatly.

A co-driver can actually control the speed of the rally car, by adjusting note pacing, inflection, and timing the driver will actually drive faster or slower.   Many co-drivers really feel that they are actually in control of the rally car.   Co-Drivers / Navigators play a very significant role in the sport, they write/revise and arrange pace notes, do timing calculations, and are very involved in vehicle service on the roadside.    With the amount of work going on by the co-driver, many get road sickness from not looking out the window while reading notes and some use ginger, anti motion sickness patches and other methods to help deal with it.   Most cars — have a bag somewhere on board.

Canadian co-driving champion Alan Ockwell recently sat down with CRC Rally TV to talk pace notes and explain what this all means.  Alan also runs a co-driving school with the Maple Leaf Rally Club for those who really want to learn from one of the best co-drivers in Canadian history.

The CRC episode from the team at CARSRALLY on You Tube is not out yet, but we do have some highlights from the recent Rallye Baie Des Chaleurs in New Richmond QC saw some amazing action.     With Antoine L’Estage and Alan Ockwell taking the event by 3 Minutes and 28 seconds — it really was a good battle.  With Antoine dropping to third during only the second stage there was time to make up.    Smart choices throughout the day resulted in catching up and by the seconds leg at B1, Antoine took the lead and didn’t lose it, with Joël Levac / Stéphanie Lewis on their heels the entire event, at one stage within 1 second finish time.

Look for the CARSRALLY team to release a full CRC episode in the near future.

Continuing with coverage of the regional Ontario Provincial Rally Championship saw Sylvain Vincent and Dominique Cyr bring home the win with only 17 seconds lead with Martin Donnelly and Angela Cosner trading stage finish wins throughout the day.  An unfortunate conflict with a tree hurt Gary Sutherland and Kelly Mathew who were in contention to win the 2WD For this event, the car was not damaged, but with nobody to pull them out they had to wait for help from the sweep team.

I provided CAR 99 support for this event and we helped 6 drivers throughout the day, with only 11 entries that means we put the hook on at least half the field with the Ontario Rally Sweep Team.   Good news, no medical support was necessary so my co driver Scott

Black Bear is without a doubt a preview for regional competitors for the National Rally of the Tall Pines with many of the roads shared between the events.  Black Bear has a reputation as a “Car Killer” — including my own Car 99 took significant body damage and a hurt power steering system. 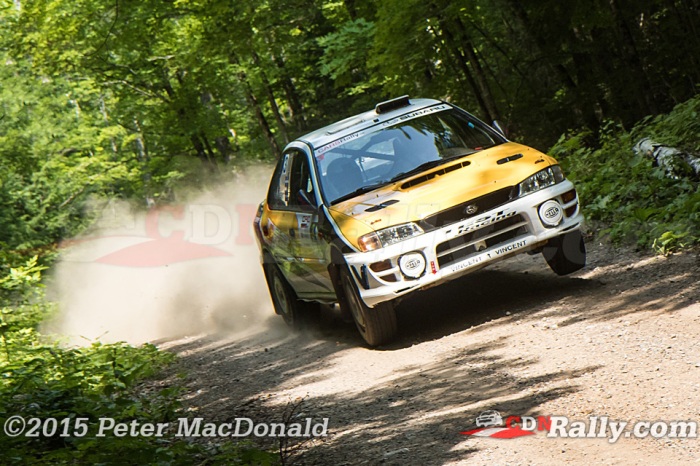 One major off saw a competitor with large jump, bounce and then off against a tree.  Reminding us again that safety is a must and please – do not try this at home.   More coverage from the OPRC team when the video arrives.

Photos are courtesy of the  team at CDNRALLY.COM

Three weeks to the Galway Cavendish Forest Rally and we are providing navigational support for the Ontario Rally Sweep Team.

Isn’t this a tech blog?

I have been involved in the Canadian Rally scene for 10 years, first a scrutineer, marshal and medic but more recently as a stage commander and course car.   For the 2015 season I have been invited by the Rally Sweep Ontario team led by Bob Boland to assist with the recovery team, this is the elite core of individuals who excel at vehicle recovery.

First at Rallye Perce-Neige in Maniwaki where I navigated for Dave and his team, and more recently at the Lanark Highland Forest Rally as the co driver for team lead Bob Boland.

The 2015 season round 2 for the regional event is held on a road used for many years near Renfrew Ontario and this year we had a new stretch of road to add to the previous “Lavant Mill” stage.  With Umphersons Mill bringing a new road to the race it was going to be an interesting day.   The weather was excellent and the event went well.

It was great to see some serious competition,  Martin Donnelly and Angela Cosner, Chris Martin and Alan Ockwell,  Nick and Kelly Mathew, Jeremy Norris and Jeff Hagan.   These are some pretty serious competitors that have competed well in national events.   This was turning into a national level competition.

After only one recovery all day (6:50 in video), I found myself assisting in the service area operated by the Ryan Huber Rally Race Developments, servicing for both of his competitors during tight service intervals.

Jumping back in to my co-driving responsibilities with Bob and the Sweep team, the rest of the day was uneventful for us, which means some great racing.

At the day end, Chris Martin and Alan Ockwell had a significant lead gaining top spot thanks to smooth driving. Nick and Kelly trading times more with Martin and Angela for the second and third position/

The coverage of this event can be seen here covered by the team at CDNRALLY.COM who are doing a great job at covering the OPRC events.

The next event is what I like to call the “Mini-Pines” with a chance to try many roads used during the Rally of the Tall Pines at year end.  The Black Bear Rally on July 11-12 in Gilmour Ontario.   http://www.mlrc.ca/blackbear/